Things to know about the Rough Rider Here are some interesting facts about the Rough Rider and the real life, real scale counterparts.

The Rough Rider must be one of the most important RC models for Tamiya ever. This model, number 15 in the row of RC cars, was the first SRB model to be released, it was also the first RC Buggy released by Tamiya, making way for nearly hundred more buggies, so far (Jan 2017) Also, the Rough Rider, released 1 November 1979, was the first Tamiya RC to use an FRP plate for chassis. All earlier models all used either an aluminum plate or a plastic tub. Of course the entire chassis of the Rough Rider is unique. The water tight radio box was also a first, the pot metal gearbox- and chassis components as well. The Rough Rider was also the first Tamiya RC model to have oil-filled dampers. All in all, a very innovative model, and surely a big step in the right direction for Tamiya in 1979. 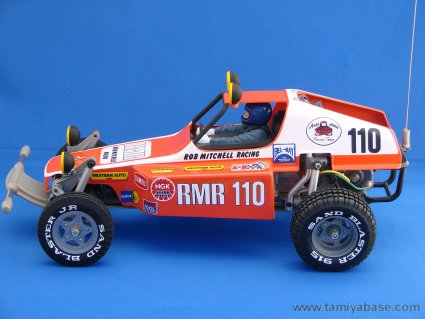 The Rough Rider came with two liveries to choose from. The top of the box showed the orange and white "Rob Maynard Racing" livery, while the alternative livery was the blue and white "Bel-Ray" livery. Both these liveries were not just inspired, but nearly copied, from successfull Baja Racers in the Califonia desert races. Actually, both of these desert racers have recently been restored and driven in vintage races in California. 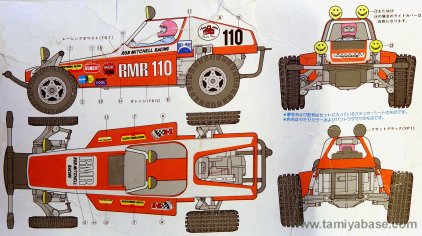 Not just the livery is based on these fast and light weight 70's buggies. The chassis of the model has similar features like it's real scale counterparts. Particularly the front suspension on the model, which on the real-scale racers were from the VW Beelte, is very close in both design and functionality. But also the rear suspension has smiliarities, using a swing axle design, again from the VW Bug, on both the real-scale racers and on the Tamiya model. The Orange "Rob Mitchell Racing" model is very close in livery to the "Bob Maynard Racing" Funco SSII buggy. Notice the name difference, Tamiya obviously did not get permission to use the Bob Maynard's name on the Rough Rider, so they made a small change using "Rob Mitchell" instead of "Bob Maynard". This liscensing issue must have surfaced quite late in the Rough Rider design and testing period, because pictures of what we must asume are prototypes in the 1980 and 1981 Tamiya Guide Books shows images with "Bob Maynard" on the Rough Rider. You can even see traces of 1979's equivalent of Photoshopping on the RMR/BMR logo. Picture from the 1981 Guide Book: Notice it says "Bob Maynard Racing" on the white area blow the driver, and you can see an obvoius manual "photoshop" on the BRM/RMR logo using a red felt-pen or similar!

Looking at the sponsors you can see that many of them were copied straight from the original, both the sponsors name, logo and position on the car. Examples are the Bilstein logo, NGK, Auto Haus and of course the famous yellow KC Daylighters. 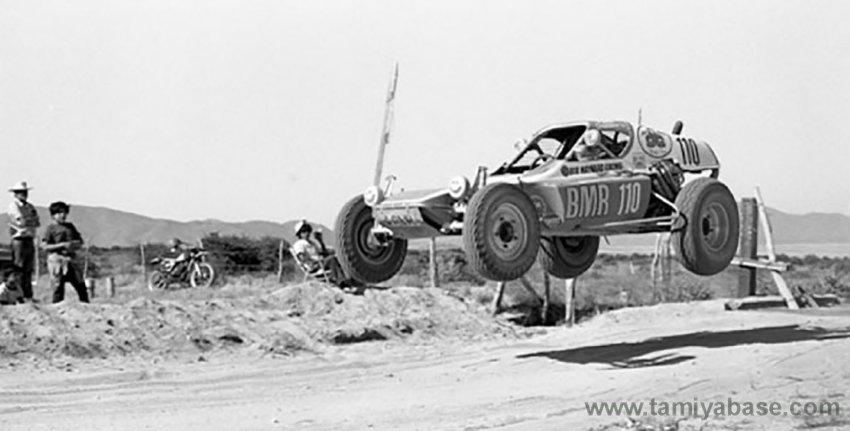 The blue Bel-Ray alternative Tamiya livery is also based on one of the reacers in California from the 70's, the famous "Bel-Ray Bullet" driven by Bud Feldkamp and Malcolm Smith. This is also a Funco rail buggy intended for serious sand dune racing. This time Tamiya made it easier on themselves, leaving out names that could lead to liscensing issues, but still the model is very close to the original. The blue and white colors match. as does the main sponsors, ISS and Bel-Ray. We recognize some of the smaller sponsors as well, but not as accurate as the orange livery. 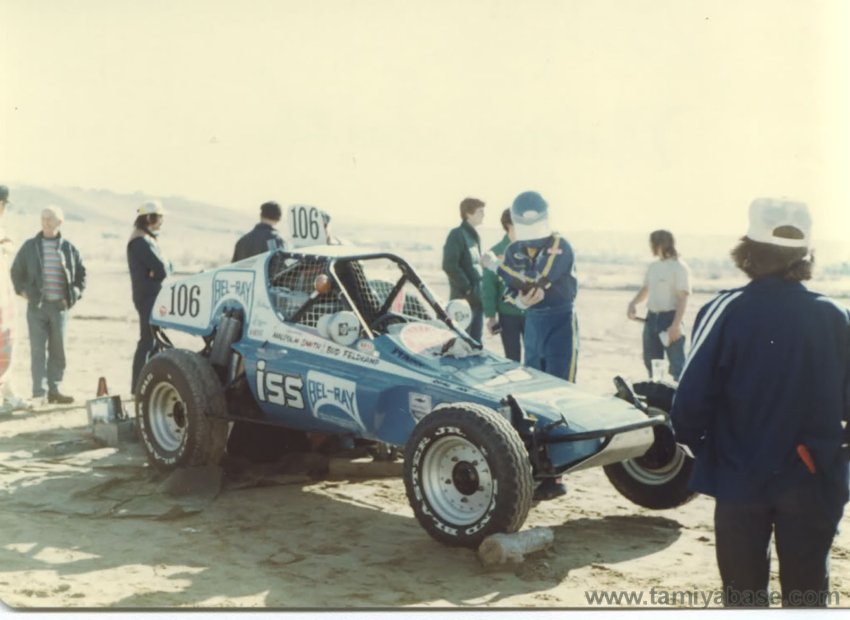