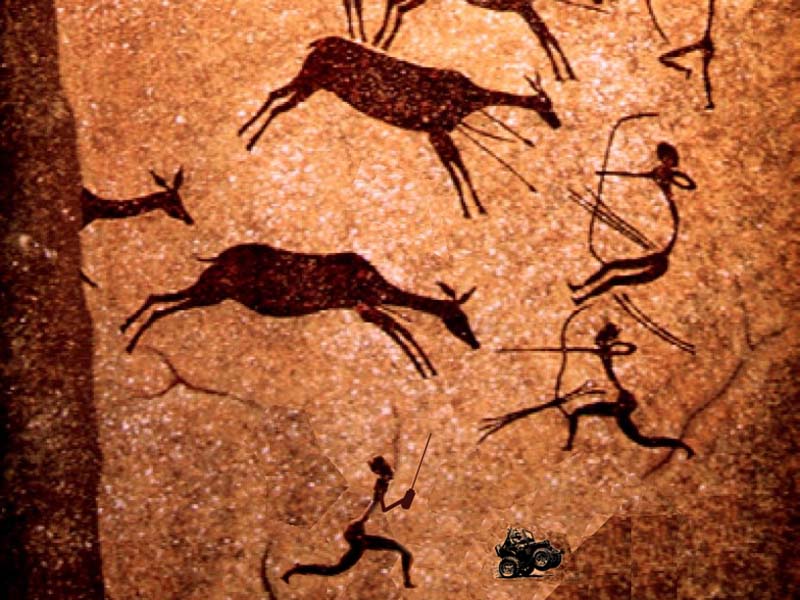 A slightly philosophical – or at least psychological - question this time – if so many Tamiya RC car bodies come moulded in the “boxart” colour (Grasshopper, FAV, later Monster Beetle, Midnight Pumpkin, Pajero wheelie, Blackfoot, Wild Willy M38 & 2, and so on), or just need a basic blow over in one colour to look good at a distance, why bother with a decent paintjob – or paint at all?

If you do have a moulded body that’s the same colour as the boxart, the temptation is always going to be not to bother, but this is not something I’d recommend – white plastic looks ok to start with, but seems to “age” & show damage far worse than a white painted car. In a week, maybe longer, you’re going to regret not painting it ... and even more so when you see the cost of good quality (i.e. original, now) decal sets for the older cars.

I think that covers to make it less like a toy, but there are several more answers I can think of off the top of my head:

Taking ownership. Remembering the old saw that “possession is nine tenths of the law”,  it seems the more work we do on an RC car, the “more ours” it is. So it looks like it does on the box. Tamiya boxart is iconic – or at least the boxes where they employed a proper artist rather than just taking photos. Following the psychological rule of primacy, where, provided we have a good experience of it, what we see or hear first is “right” or “best”, then it’s only natural that a lot of the time people will want to replicate the boxart scheme. This is not _quite_ conformity – Tamiya will have spent a lot of time researching colour schemes & chances are they have come up with one than is better than most.

A small fraction of people, who unconsciously see the “law” as something sacred – in this case so it’s how it is in the manual – would see merely going by the perceived colour of the boxart (red for the Sand Rover, black for the Pajero MTW) as wrong – it has to be by the book  (orange, and blue, respectively).

To Personalise. A small subset of the population, consciously or unconsciously want to be a violator of customs & rules, so will make sure their cars are _nothing like_ how they are on the box. A tiny fraction of these people are genuinely artistically talented with a good eye for colour, the rest have basically just cut the resale value of their RC car in half.

A more “normal” (or “conformist”?) approach is to either go with the alternative boxart colour schemes (e.g. red & yellow for the Sand Scorcher) or pick a shade that is very close to boxart, _but not exactly so_, to safely “rebel”.

By the way, let’s be clear that I’m _not_ saying what colour you paint an RC car _defines or labels your whole personality_ ;)

To paint it your spouse’s favourite colour. If you don’t understand why this is important then you’ve clearly never been shopping for a 1:1 car ... or curtains, or wallpaper, paint, cushions, etc with a woman. Not only do women see colours better than men – and I mean in general, not just the much higher incidence of tetrachromatic vision in women, or the much higher incidence of colour blindness in men - colours are also a bigger deal to women.

Quite why this is open to a lot of speculation, but our Neanderthal heritage is probably a lot of it, yet again. While the men were out proving their machismo by demonstrating who had the biggest club – by belting woolly mammoths over the head with it – which just needs an ability to see movement, not colour; supposedly the women were at home interacting socially, doing things with berries and looking after babies – for all of which a greater perception of colour is a benefit, assuming you can perceive them. Tiny changes in skin colour from microscopic blood capillaries indicate changes in mood, very specific shades of yellow (or whatever) can indicate if fruit is merely unripe, or poisonous ... and being able to tell if your sprog needs changing, is constipated, has a rash, a fever or is choking, rather than merely “turning red” as a guy would see it has obvious benefits for the continuation of the species. Going back to cars, in part your average bloke is willing/able to separate aspects of the car – brand, function, shape, colour, interior, what’s under the bonnet, handling, price, etc – and not immediately write off an entire make/model based on any one of those, and to a certain extent, has different priorities, colour being a very low one. Women though will immediately say “I don’t like that one” if they don’t like the colour (not that they’ll say that), causing the bloke that is trying to “help” to write off that make/model from the list of options, only to experience consternation later when the woman then says “I really like that one” about a car that it is not only the same make/model as the one rejected earlier, it seems to be the _identical_ same colour. Of course, it’s not – it’s 1/100th of a Pantone shade further up or down the spectrum, which you should know is actually “completely different”.

You’re on a hiding to nothing attempting to get your spouse interested in RC cars if you ask me – but painting a car the “right” colour has got to improve your chances.

By the way, I haven’t entirely precluded from my thoughts the possibility that a woman is painting an RC body shell for her partner – if that is the case, then ... congratulations.

To paint it your kid’s favourite colour. Chances are a boy will be interested in RC as long as it’s not a “girly” colour; female offspring as above but less so.

It’s in our nature. Ever since our caveman ancestors got come after a hard days hunting & realised that there was no fitba on the telly – and indeed that the invention of the television and Premiership football were millennia away -  there’s been a need for entertainment in the home, and to personalise the environment.

This leads us on to bragging rights and/or a demonstration of skills. It can’t be coincidence that the cave paintings seem to be mostly hunting scenes – immortalising not only that hypothetical caveman’s prowess with his spear, but also his skill at visually recording it.

Seeking Plaudits from fellow travellers is not quite the same thing, but again, this is a basic human drive – to have the approval of your peers... but if it’s the only reason you’re doing it, or you’re too neurotic about it, it’s not a good thing.

What it boils down to then really seems to be ... “man paint cave!” :D

#2 Hay Ewe 2013-08-07 14:39
Mrs Hay Ewe was not originally too interested, but then she was a bit more so, and the colors of Veronica McSpeeds Supershot where chosen by her and she even painted most of the body shell.